Thinking outside the box part 2

So I just discovered a cool new feature in ICMizer that allows you to analyze any pre-flop situation i.e. those spots where there are at least 2 actions before you pre-flop that SNG wizard couldn't deal with, so I thought I would revisit my last post and try to explain the situation in greater depths and convey just how bad calling off with some hands would be and to demonstrate how raise-folding/effective shoving is much superior to shoving all-in in those spots when you're short stacked on the bubble. See previous post for the hand history.

So I've replicated the situation in ICMizer to give the hero a limp and the other stacks all-ins. Since it seems all pre-flop situations are now analyzable in ICMizer, there's no need for any boring longhand written ICM calculations; to perform the calculation and get some answers all we'll have to do is estimate both opponent's hand ranges – plug that in, then we'll be able to see just how bad calling off with certain hands in this situation will be.


Estimating an opponent's hand range is a difficult thing to do in poker, it requires a lot of studying of various spots and experience and repeating situations over and over. In this situation, the SB is a decent reg and I have 1.5bbs so almost any two cards are just about good enough to take me all-in. However, he is still shoving by the Bb so he is effectively shoving for 15bbs so he likely won't be any two, although he'll rarely expect to be called by the mid-stack here. With this in mind, I've assigned him a range of 63% of cards estimating that he'll limp everything from about 63% to 90% then maybe fold the most absolute of junk – the bottom 10% of cards.
Estimating Bbs range

Estimating the Bbs range is a bit more tricky; I now have the benefit of knowing he called off with 8s in this spot which is really bad, so clearly he has little understanding of ICM. In the small sample of hands I have on his HUD, his VPIP/PR are 18/6 with a BBFTS of 43, so he's definitely passive but not super loose. Given this, I've assigned him a subjective range of 9.65% of cards which is 5s+/A-10o+/A-9s+; I'm guessing if he's bad enough to call off with 8s here he'll likely call off with a bunch of other hands he shouldn't with as well such as A-9s and A-10o and a few more pairs.

Since he is a fish and won't be considering the ICM of this situation, it probably hasn't even occurred to him that I can fold in this spot when the action is back on me once the two other stacks are all-in; his thought process is more likely to be: “well, this guy on the BTN has 225 chips committed and only 76 chips behind now, he isn't folding with those amazing pot odds”. This might mean his range for calling off is much wider than the range I initially estimated i.e. he may easily just call off with the top 20% of hands here if he feels the big stack is pushing wide given he won't be expecting the hero to fold. If this was true, it just means calling off would be even worse for the hero given the big stack will have more equity against the mid-stack (thus in theory the hero coasting into the money more often upon folding when the action returns).

So let's take a look at the situation in ICMizer: 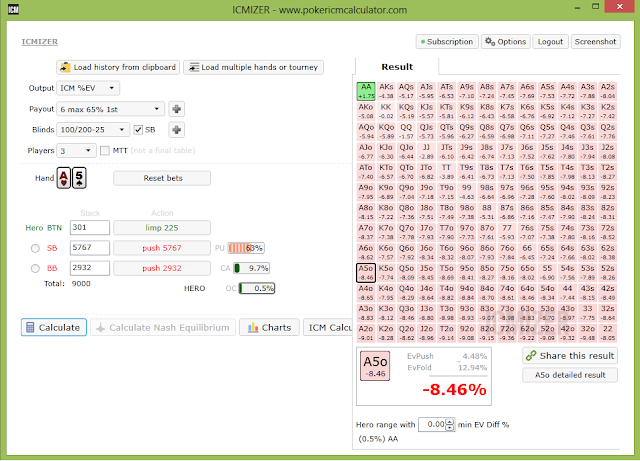 And as you can see, calling off with A-5o would cost us 8.46% in equity of the prize pool. In this $60 buy-in, that equates to $28.26 in money (almost half of our buy-in)....MASSIVE!!! As I've already elaborated on in previous posts, mistakes that cost you 1% in equity are pretty big so you can understand just how bad it would be to call off here. And infact, you can actually see that the suggested range for calling off (displayed in green) here is pocket Aces. Calling off with Ks is marginally -EV and calling off with Qs costs 1.6% in equity which is pretty damn bad. That may shock some of you but it's pretty simple: since we're so short on chips our equity remains really low so there's not a whole load of value in tripling up and we've got a much better shot at making money by allowing the other stacks to collide. This would be a different story if we had a 1k/1.2k stack, and you would definitely be calling off with Qs since you stand to gain a lot more tournament equity since you'll have at least a third of the chips in play if you win and there's some merit to your stack, so in that case it is worth the risk of having to overcome both opponent's hands relative to the gain.

As I said earlier, since this fishy opponent clearly has no grasp on ICM, my estimations of his hand range may be off; it may be possible he calls off with around 20% of hands, so let's see how that affects things: 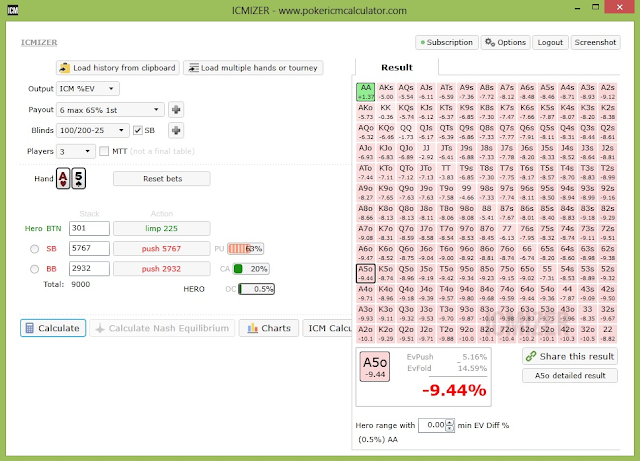 And as you can see, the range of AA remains the same but you can see that calling off with different hands costs more money. Calling off with A-5o costs almost an extra percent in equity, and pocket As declined from winning 1.75% of the pool to 1.37%. This is simply down to the fact the big stack has more equity vs the mid-stacks range as it has more hands in it, and so the chances of us cashing increases.


The bottom line is, always non-all-in shove as the short stack on the bubble on the chance both the other opponent's end up all-in and you can give yourself the chance to fold and a better shot overall at making money.
Summing up, the mid-stack's play is devastatingly bad and his range for calling off should be Ks+ but I won't go into too much depths about that, I wanted to focus on the play of the hero's stack in this hand and hopefully the above is enough to convince you that you need to be calling super tight as the short stack on the bubble when the other stacks end up all-in and almost with a non-existent range when crippled.
MikeyMcD45 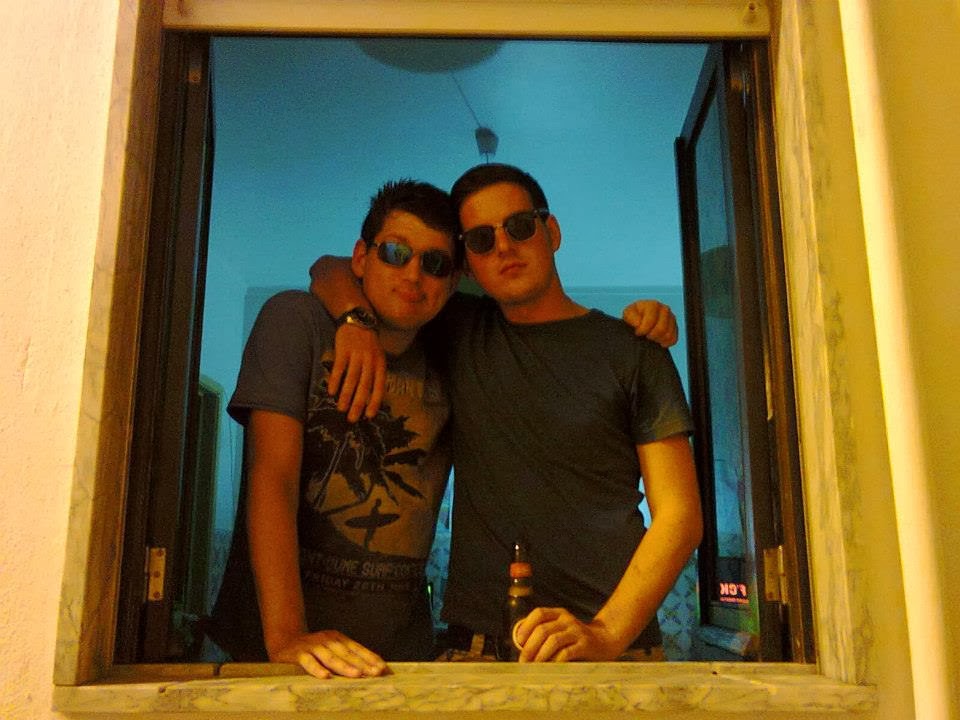